Much awaited dream of getting my own mountain bike becomes true last month. :) Last month I bought KHS Alite 500, 2012 model from Pedals and Wheels Malleshwaram. Odo reads around 300 Kms and am loving the rides! First I fell in love with Bullet, then I fell in love with Biking as its even more adventurous and fun. A lot of people get this silly idea in their minds that he is doing a vain attempt to save environment, some say he is over-doing a workout and getting thinner, some even kindle the way I look wearing my cycling attire. But I don't care for what people think because more than all that stuff, I bike just for my own enjoyment :)

Coming back to my original title - USB charger using cycle dynamo. This was my last weekend's plan which I got executed this whole week. My room had become a electronics workshop for a while with smell of burnt solder and also a generator room with the sounds of dragging dynamo over the tire treads. I burned a little of  midnight oil during weekdays in completing this project.

The basic drive for coming up with this charger is to charge my Phone/Camera/GPS device on long touring.
All feature-rich-smartphones have got a weak battery life. Mine is Motorola Defy BF5X 3.7V, 1500mAh which lasts for about max 2 days with CPU underclocking governors of 300MHz and 600MHz in action!

Recently bought a MINI DVR 80, sports camera to shoot my biking adventures which will now be usable if have a all-time-charger on the go!


Having worked on basics of 12V electricals in Bullet it was a pretty easy job to design battery charger for my cycle dynamo. Principles involved are the same and anyone can design it in minutes if you had attended your high school class about non-linear circuits.

This simple circuit below will explain a lot more:

> The output current varies from 0-1A based on the speeds of the cycling. IC7805 starts to give the output at speeds of 6-7Kmph as the input unregulated DC supply should be more than 8V for IC7805 to kick off.

> The power of dynamo itself restricts the capacity of current it can drive to the IC and thus a decent shunt resistor of rated around 2-3W should be sufficient.

> Capacitor could be more better if its rating is something like 25V, 0.1F. More-the-better. Will hold more charge and thus keeps charging for a while even though you stop for a while during the ride.

> This is not a very efficient circuit but just works for me. I saw better designs on web doing similar stuff. Output current should be ideally 1/10th the Ah rating of the battery being charged from the USB, as there will be chances of over charging and also lessens the life of rechargeable Li-ion batteries. You will need to add voltage comparator and make current trickle when fully charged. Then circuit becomes more complex. But to avoid this I usually connect the USB output to a portable battery power which has got protection inbuilt to cut-off the supply when its fully charged. (Note that, this portable battery power can be charged by other power outlets as well)

Further upgrades would be to put a high rated capacitor like 1F and put some 3W LED lighting for the front and the rear which could lessen the value of current limiting resistor.

Things you need:
1. I found the circuit of full wave bridge rectifier in a damaged wall charger adaptor unit of my WIFI modem at home. It had real good diodes IN5400 which can rectify upto 50V, 3A. A cycle dynamo can never reach that power rating to burn them!
2. Regulator IC costs some 8 Bucks (Courtesy: Famous SP road of Bangalore)/ Or you can find it in some old radios/ Or go to local TV repair shop.
3. Most important of all! Bottle dynamo, Just the generator coil with strong neodymium magnet will cost INR 80. (Hub dynamos will be better as there wont be drag/tire wear)
4. A USB Type A socket (Female pin). (A cheap USB adapter cable which was unused at home)
5. Soldering gun + solder paste + solder wire. (You can get soldering done in nearby electric shop if you are not good at working with PCB)
6. Insulated wires (About 2 meters)
7. A Heatsink(+ metal paste) for regulator. I made my own heatsink with several folds of Aluminium foil as the power dissipation will be less if cycling speeds are around than 20kmph ;) And I don't expect to reach constant speeds of 40kmph during touring.
8. Alligator clips for clamping at the dynamo output terminals. (I use them as its flexible for removal. Saddle bag can hold all of the charger circuit when I want to remove)
9. A digital multimeter to verify that circuit is behaving as expected. (An oscilloscope would be better to view it graphically :P)

With an overall cost of around INR 250 anyone can build this circuit.

Even Nokia has come up with bicycle charger kit but at a whooping cost of INR 1500!!
http://thegadgetfan.com/gadgets/nokia-dc-14-bicycle-charger-now-available.html

Some pics of my project: 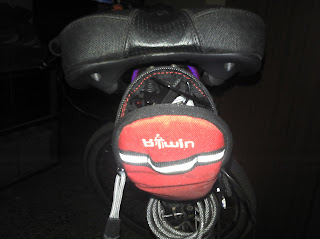 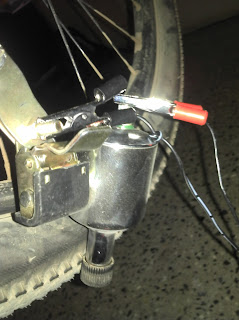 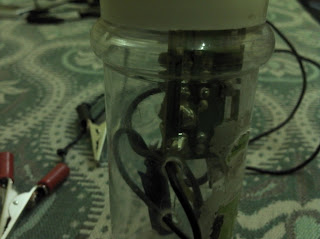 With just about 20 Mins of cycling at 15kmph you could easily recharge the phone for about 30 mins of talk time / 20 hours of standby time! You can disengage the dynamo from wheel by pulling and pushing a lever when you want to stop charging.

Disadvantages:
1. Drag when the dynamo is in action. (Quite a humming sound at rear which makes the nearby street dogs chase you at times! :P)
2. Tyre wear (I don't think much as MTB tyres are built for more worse terrain)
3. Weight of dynamo (around 200 gms). Wont be much of effort to pull that weight along on an Aluminum frame bike.

Super lo! Let me check this at office :)

Hay Karthik,
I really liked u'r efforts of making things by u'r self.. The way u have explained gives clear instruction for any GGI to try and also encourages them to think of doing something of their own through which they feel pride of themselves.. keep up the good work. I personally wanted to try out with u'r inputs..
Best Regards..GoGreen Rao

Great work. Keep it up!

Love the idea, done waiting for some famous brand to come up with the little useful thing for us priced so heavily! You set a great example!! Much appreciated! Please join us in gogreen ride and give a demon of your technique, which is going be a trendsetter.

Excellent. Keep the good work. All the best.

@Prabhakar Rao, I am glad that a lot of cyclists find my blog post useful.

@Rajarajan, Sure. I shall show a demo of how it works when I join the Cubbon park weekly campaign rides next time.

Great job karthik. The DIY stuff is a lot help to many folks. Just a thought is it possible to attach tiny magnets on the spokes (not all but just a few) and then have a copper conductor to make electricity by electromagnetic induction ? I'm not an electric/electronic buff. But if this can be done then the drag/resistance due to a heavy dynamo is reduced.

True! I found this website which explains the stuff you are talking about http://www.freelights.co.uk/how.html

Tried it out before going for mechanical dynamo. Just to test, I had about 50-60 turns in the coil. But the power output you get from that is very less and the in pulses of milliamps of current are not enough to charge continuous.

To get good output we need 400 turns of coil wound over something like a spool placed very close to the spoke with the gap of just 5mm. A strong rare earth magnet inside that spool and atleast two bar magnets on spoke.

Rare earth magnets are costly and copper enamelled wire about 28 gauge for 400 turns is like 50-60 meters in length which would again be costlier than the second hand dynamo which you can get from cycle spares shop. So decided to live with dynamo use. Also for USB charging you won't have to engage the dynamo for a very long time unlike the lights which need to be run for all time during dark.

Hey Karthik,
This is simply awesome. You've really put it across in a very simple & elegant way even though it was quite a task or you to do. Having seen the working of it when we went for the trek,i went back home & read this blog to understand how was it done. The passion with which you've done is worth appreciating. Good job & we'll love to see more of such things in future.
:)

I am constantly invstigating online for ideas that can benefit me. Thanks!
Pet Gear PG8100ST Happy Trails Pet Stroller, Cobalt Blue

7805 is not a good option.
Basically it just burns all the extra energy and turns it into heat.
It's not a problem when speed is low and load is low. But when you ride fast and try to charge energy hungry device (1A+) then it will heat up and needs a heatsink.
But on the other hand it is very simple and cheap.

If you want energy efficient solution, search ebay for LM2596. It is a DC-DC converter and you can select output voltage (in 1.23-30V range). All you need is a bridge in front of that.
I have not tried it myself but it should work in theory (you need input to be about +3V higher than output) and it's very efficient regardless of speed and load. And it only costs ~$1.5.

I have not measured real voltage of dynamo but if it goes above 8V, then it can be very good solution for USB charging. If you need less than 5V then it's even better.

Thanks for this awesome post, it was really helpful and I really appreciate your hardwork. In case you use Vodafone cellular service and want to know how to perform vodafone balance check then you can visit this page for more details. https://wpvkp.com/vodafone-net-balance-check-ussd-codes/

First, Thanks for this wonderful information. This article is very helpful to all users. Thanks a lot for sharing.
manage subscriptions iphone
jquery cdn google

Thanks great article I really like your article you can also visit Lucky Patcher Thanks.

The Liztek USB Desktop Charger is compatible with all USB 3.0 port devices (including all the smartphones showcased here today!). Just plug and charge!

I think this is wonderful I truly appreciate the information shared in this post I am going to bookmark this.
bigrock coupon

Your blog was absolutely fantastic! A great deal of great information and this can be useful some or maybe the other way. Latest Showbox apk

Thanks great article I really like your article also visit apk minecraft Thanks.

Latest Trending arabic mehndi designse The trends in Mehndi Design have been through a vast change since it was once discovered.

Great post thanks for sharing. lucky patcher, whatsapp plus

Now most bicycles have generator built in wheel - usually Shimano. This kind of generator will damage this charger and connected device because output voltage can reach up to 80 V. Also using linear power circuit is not optimal because you loose output power - lot of energy goes into the temperature.

May i consider your ideas you are offered to your post. They are really convincing and will certainly work.Thanks for the post.Thanks for sharing it here.
Lowrider Car Game Premium 1.70 Apk

Thanks great article I really like your article also visit World Championship Tournament 2005 Thanks.

Kartoon
A "balanced" strong mind in an athletic body! An introvert by nature, a very good listener and observer who silently takes in everything that happens around him. Always wants to keep others and oneself happy. I enjoy even the smallest happiness I see around. I like poetry. A learner from life. An optimist. An amateur photographer. Highly adventurous. Hates hypocrites. Very intelligent and passionate for Knowledge. Pakka software Engineer/Programmer. Non Drinker, Non smoker, Purely vegetarian. Kannadiga,Indian and foremost of all a kind Human! :) Listen to my words in action @ At my other juvenile poem blog :)